Remember the kid on the playground that would change the rules of a game as they went in order to win? That’s basically Twitter.

In the most recent installment of the Twitter files, it was revealed that Twitter execs intentionally changed company policies to banning people in order to ban Donald Trump who they clearly do not like.

“Do not like” is even quite the understatement. One Twitter Exec, who’s in charge of “safety and trust” went as far to state that there are “ACTUAL NAZIS IN THE WHITE HOUSE” in all caps. Check it out in the post below: 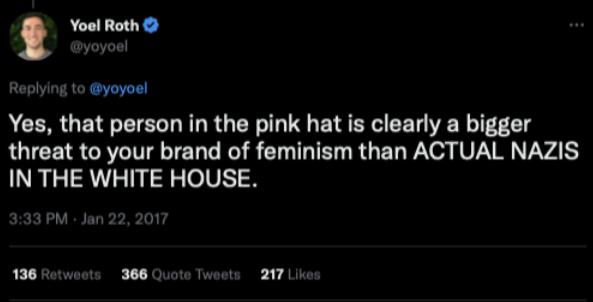 Not only does this show a conflict of interest from those behind the scenes at Twitter but it also shows their direct motive for changing the rules in order to ban Donald Trump.

The series of events that follows shows exactly how they went about changing their rules and also displays the internal corruption that the company had before it was bought by Elon Musk.

On January 7, @Jack emails employees saying Twitter needs to remain consistent in its policies, including the right of users to return to Twitter after a temporary suspension

After, Roth reassures an employee that "people who care about this… aren't happy with where we are" pic.twitter.com/IfDpEVnOtR

Following that message where someone clearly wanted to stay consistent with policies, Roth the Twitter Exec featured above shares gleefully how they plan on changing the rules. Check it out below:

Around 11:30 am PT, Roth DMs his colleagues with news that he is excited to share.

The new approach would create a system where five violations ("strikes") would result in permanent suspension. pic.twitter.com/F1KYqd1Xea

Roth shows below just how the company continues to go about changing the rules as the news begins to break:

The colleague wants to know if the decision means Trump can finally be banned. The person asks, "does the incitement to violence aspect change that calculus?”

Roth says it doesn't. "Trump continues to just have his one strike" (remaining). pic.twitter.com/Qyi1sJNa0w

Despite not banning Trump in the messages shown above, Twitter clearly is laying the precedent for banning Donald Trump. Sure enough, the foreshadowing above displays their initial motive for banning Trump and the result of their actions can be seen below:

Roth's colleague's query about "incitement to violence" heavily foreshadows what will happen the following day.

On January 8, Twitter announces a permanent ban on Trump due to the "risk of further incitement of violence." pic.twitter.com/psLb5HDGQP

Just one day after changing their own rules of the playing field, they set their trap and intentionally try to catch Donald Trump in it claiming that he is at risk of of further “incitement of violence.”

What happens next is damning. On January 8th, 2020, Twitter backs up their ban of Donald Trump claiming that the sitting President’s tweet’s deserve to be banned because of how they may be “received and interpreted.”

What’s even crazier is that just a year prior, Twitter announced that the company did “not attempt to determine all potential interpretations of the content or its intent.”  Check out that evidence in the tweet below:

On J8, Twitter says its ban is based on "specifically how [Trump's tweets] are being received & interpreted."

But in 2019, Twitter said it did "not attempt to determine all potential interpretations of the content or its intent.” https://t.co/2jW1s5pH4W pic.twitter.com/8gZwIDtyUQ

You would be correct. In fact, some folks within the company raised concerns but their voice was ultimately squashed in the end. Some of the quotes listed for questioning the company can be found below:

Those tweets can also be found below:

"This might be an unpopular opinion but one off ad hoc decisions like this that don’t appear rooted in policy are imho a slippery slope… This now appears to be a fiat by an online platform CEO with a global presence that can gatekeep speech for the entire world…" pic.twitter.com/4pedmgY8pa

This is an updating story, please feel free to check back shortly as new evidence is brought to light…

In the meantime, check out other damning and previous pieces of evidence released by CLICKING HERE.