According to a bombshell new report by the Daily Caller, Democratic governor-elect of Arizona, Katie Hobbs’ top deputy sent a shocking threat to the Mohave County Board of Supervisors, demanding that they certify election results in her favor or else be met with prison time.

The cited statute is a Class 6 felony that could result in two years in prison.

JUST IN: Katie Hobbs' office emailed Mohave County supervisors and threatened them with two years in prison if they didn't certify election results.

The Democratic Party is the new CCP.

“Our office will take all legal action necessary to ensure that Arizona’s voters have their votes counted, including referring the individual supervisors who vote not to certify for criminal enforcement under A.R.S. 16-1010,” Lorick’s email read. 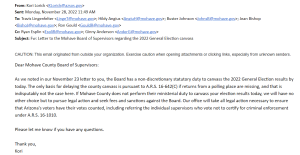 Lorick’s threat of prosecution was one of several efforts made by Hobbs’ team to force Mohave County to certify its election results before the Nov. 28 state deadline. Republican members of the board, like in other counties in the state, had sought to hold public hearings regarding the validity of voting machines used in their precincts, over concerns that they were not properly approved by the Secretary of State’s office.

Lorick also sent a letter to the board warning that their voters could be “disenfranchised” if they did not certify by the deadline. The letter, obtained exclusively by the DCNF from Lingenfelter, states that the board “has a non-discretionary duty to canvass the returns of the election,” and that a failure to do so “will only serve to disenfranchise that county’s voters,” mirroring her warnings to other GOP-led counties that their votes “may be excluded” from the final tallies, thereby affecting results.

Mohave County was one of several counties seeking more time to review election integrity issues, though it is the only county whose elected representatives are known to have been threatened with arrest. Cochise County, another GOP-led county in the state that has not certified its results, is currently the subject of a lawsuit by Hobbs’ office, though none of their members have reported criminal prosecution.

The Mohave County board eventually certified the results of the election on Monday, Nov. 28, before the deadline expired, though the threat of individual legal consequences for members may have altered their willingness to delay certification, like Cochise. During the video broadcast of the canvas meeting of the board, Supervisor and Chair Ron Gould mentioned that the actions were “under duress.”