Despite the FBI’s denials that evidence that the nation’s premier law enforcement agency colluded with Big Tech platform Twitter to unconstitutionally censor Americans’ political speech, a brand-new Twitter Files dump shows that the FBI did just that.

The latest Twitter Files revelations starts off with independent journalist Matt Taibbi discussing the FBI’s response to the first batches of Twitter disclosures.

“It didn’t refute allegations. Instead, it decried ‘conspiracy theorists’ publishing ‘misinformation,’ whose ‘sole aim’ is to ‘discredit the agency,’” Taibbi wrote, referencing the way the FBI dismissed censorship allegations as a conspiracy theory. 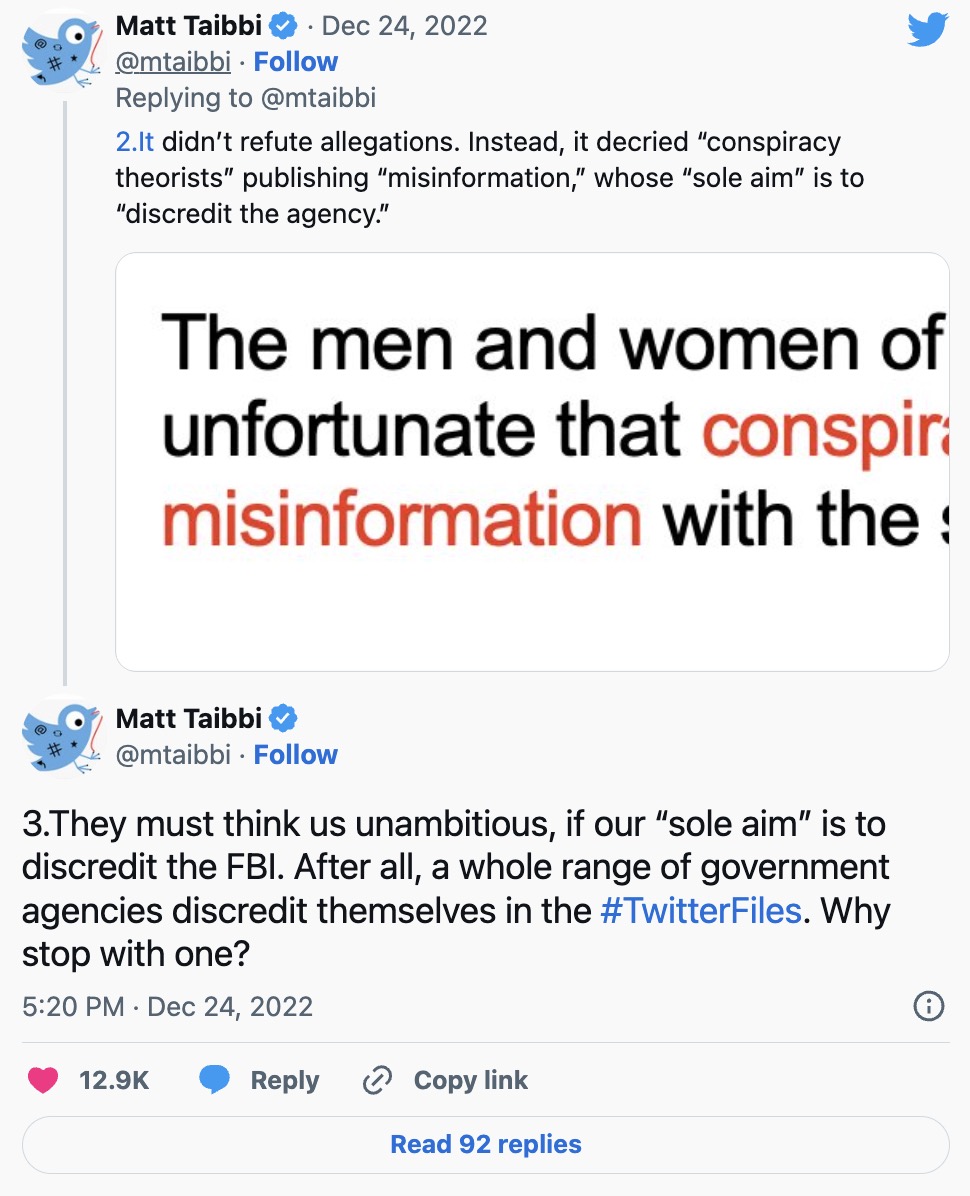 The Christmas Eve revelations suggested that the FBI acted as a “doorman to the vast program of social media surveillance and censorship.” Taibbi says more government agencies were involved – from the “State Department to the Pentagon to the CIA.”

Taibbi said the process is “far bigger than the reported 80 members of the Foreign Influence Task Force (FITF),” that was referred to in previous disclosures. Taibbi said Twitter worked with so many agencies the executives at the company “lost track.”

“Is today the DOD, and tomorrow the FBI? Is it the weekly call, or the monthly meeting? It was dizzying,” Taibbi wrote. 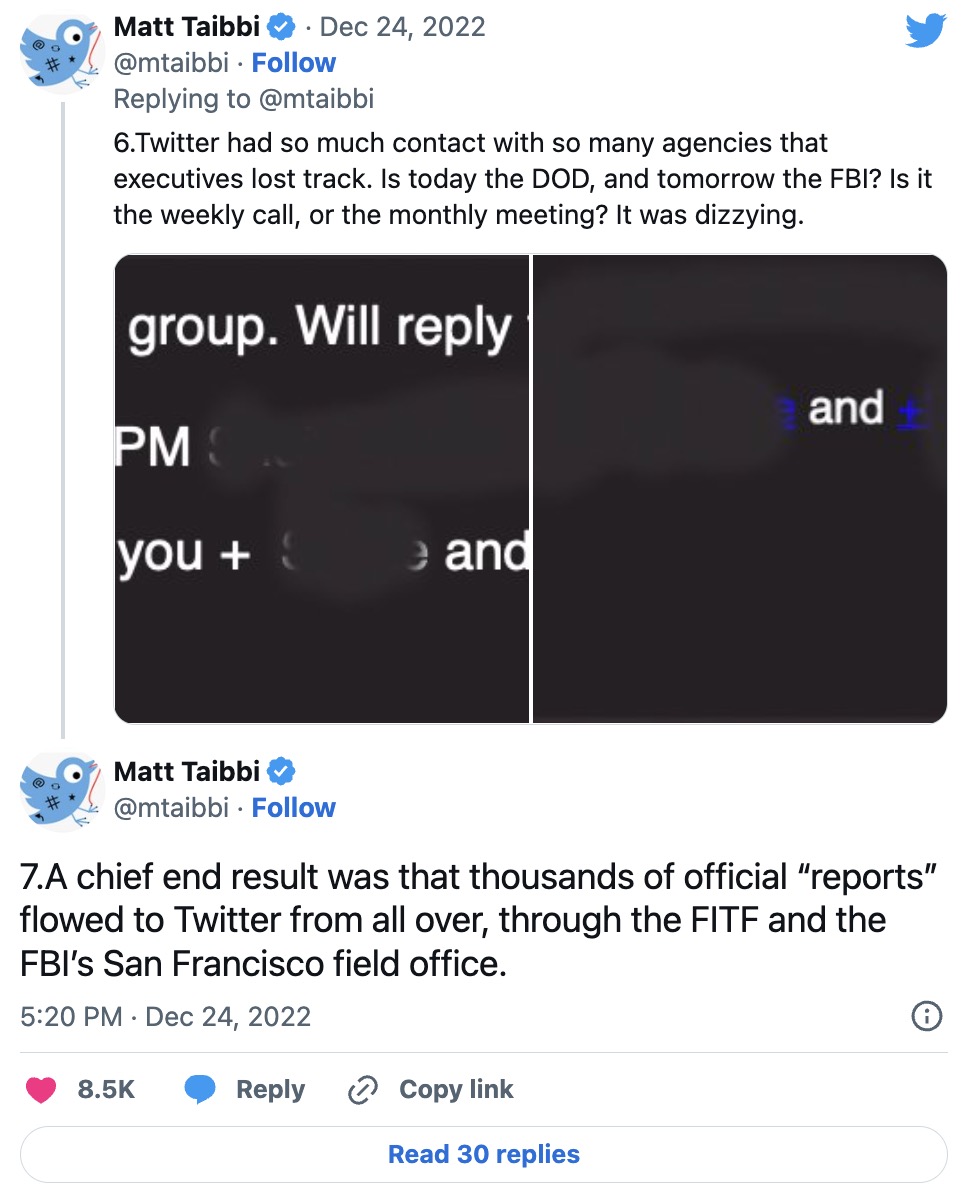 The disclosures state that “thousands of official ‘reports’ flowed to Twitter from all over, through the FITF and the FBI’s San Francisco field office.”

On June 29th, 2020, San Francisco FBI agent Elvis Chan wrote to Twitter executives, asking if he could invite an “OGA” to an upcoming conference. Taibbi stated that OGA stands for “Other Government Organization,” which can be a euphemism for the CIA. 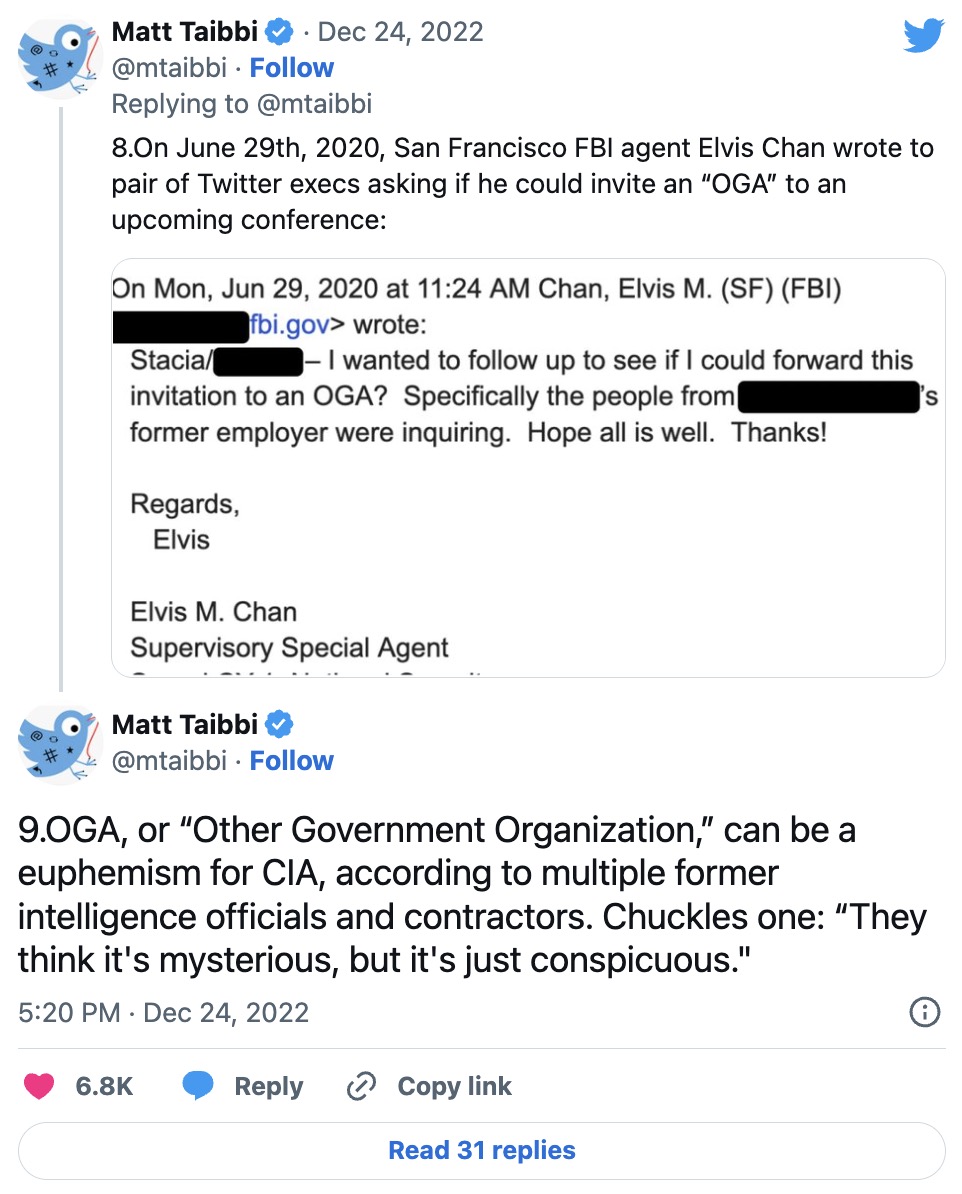 “‘Other Government Agency (the place where I worked for 27 years),’ said retired CIA officer Ray McGovern.”

Taibbi said it was an “open secret” at Twitter that one of its execs was ex-CIA, which is why Chan referred to that executive’s “former employer.”

The latest revelations show how the FBI moved away from a purported foreign influence mission to domestic content moderation; “from state governments, even local police,” Taibbi added.

“Many requests arrived via Teleporter, a one-way platform in which many communications were timed to vanish,” Taibbi revealed.

“Especially as the election approached in 2020, the FITF/FBI overwhelmed Twitter with requests, sending lists of hundreds of problem accounts,” the disclosures revealed. “Email after email came from the San Francisco office heading into the election, often adorned with an Excel attachment.”

Taibbi revealed there were so many government requests, “Twitter employees had to improvise a system for prioritizing/triaging them” and that “The FBI was clearly tailoring searches to Twitter’s policies.” 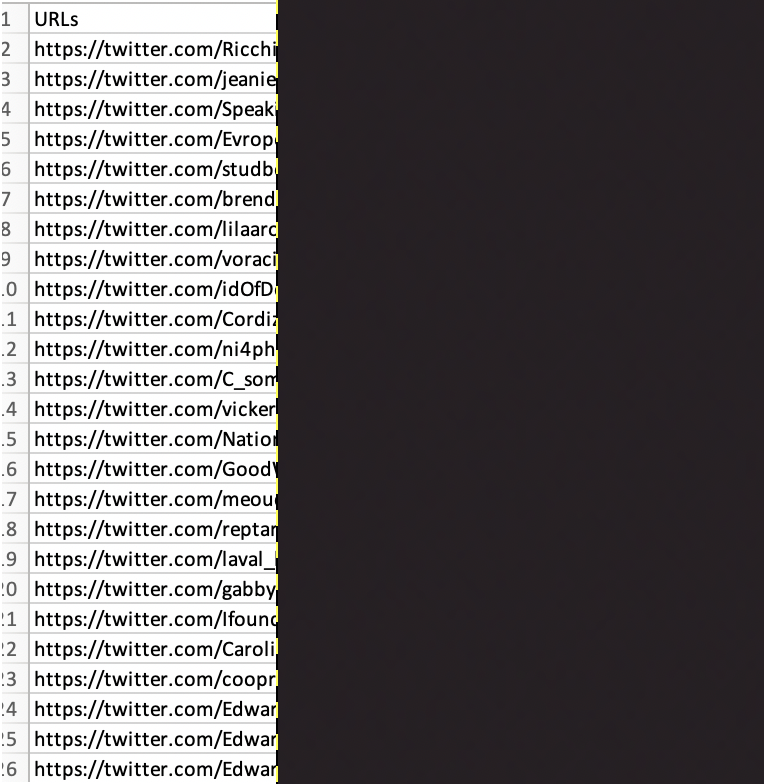 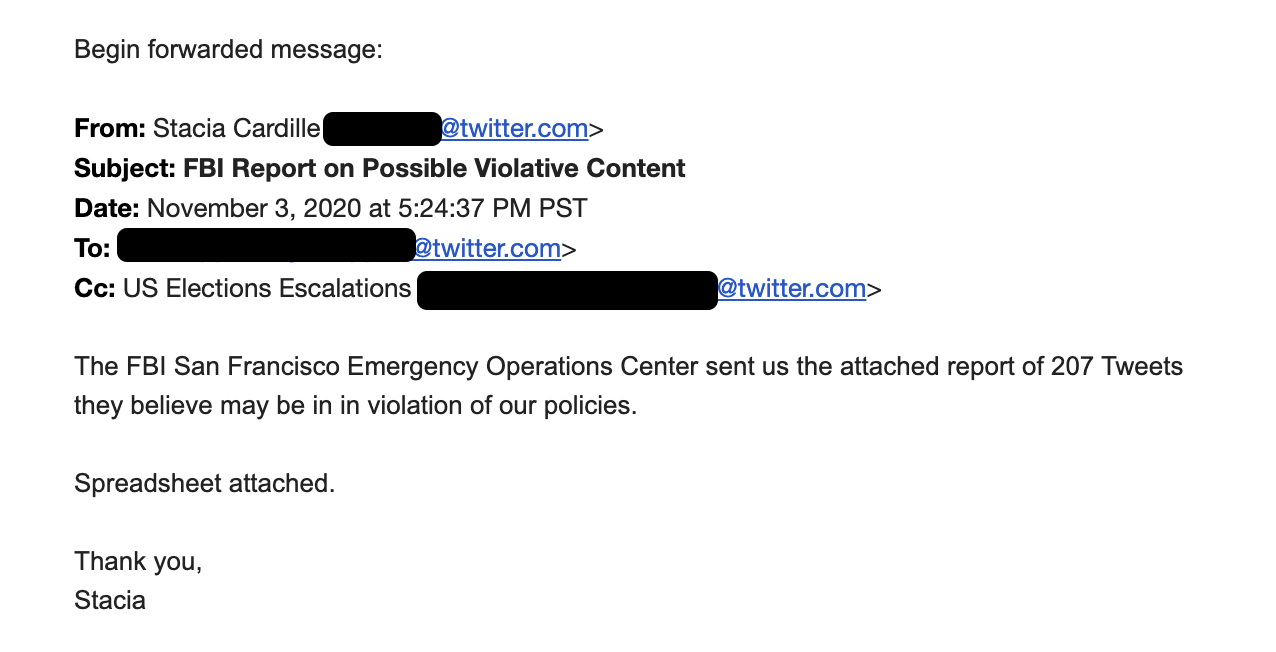 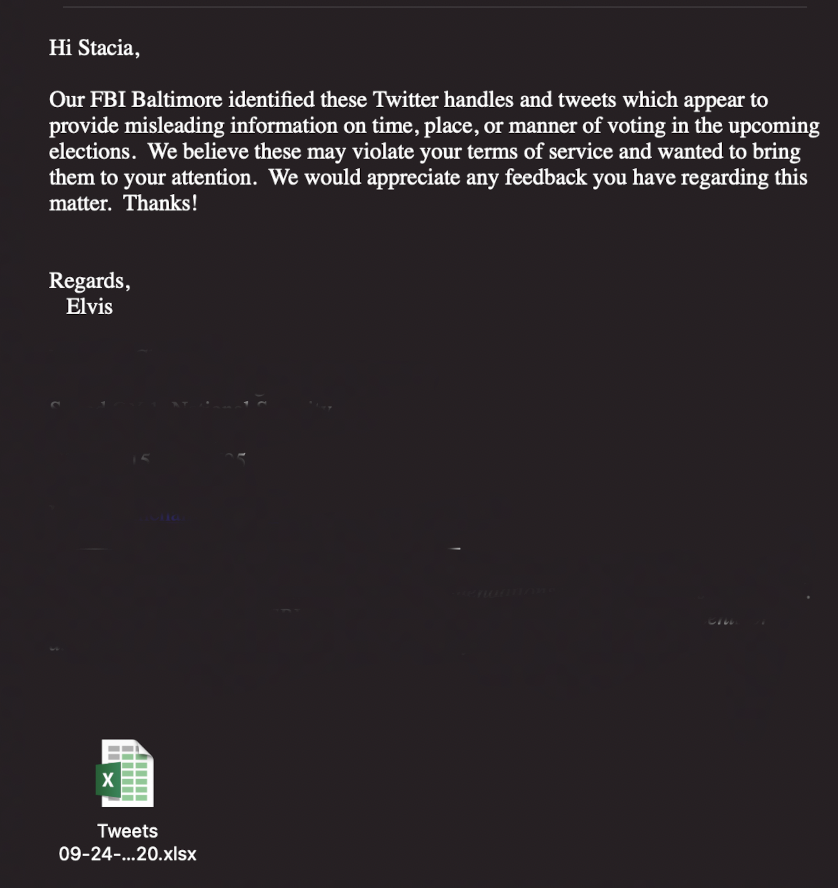 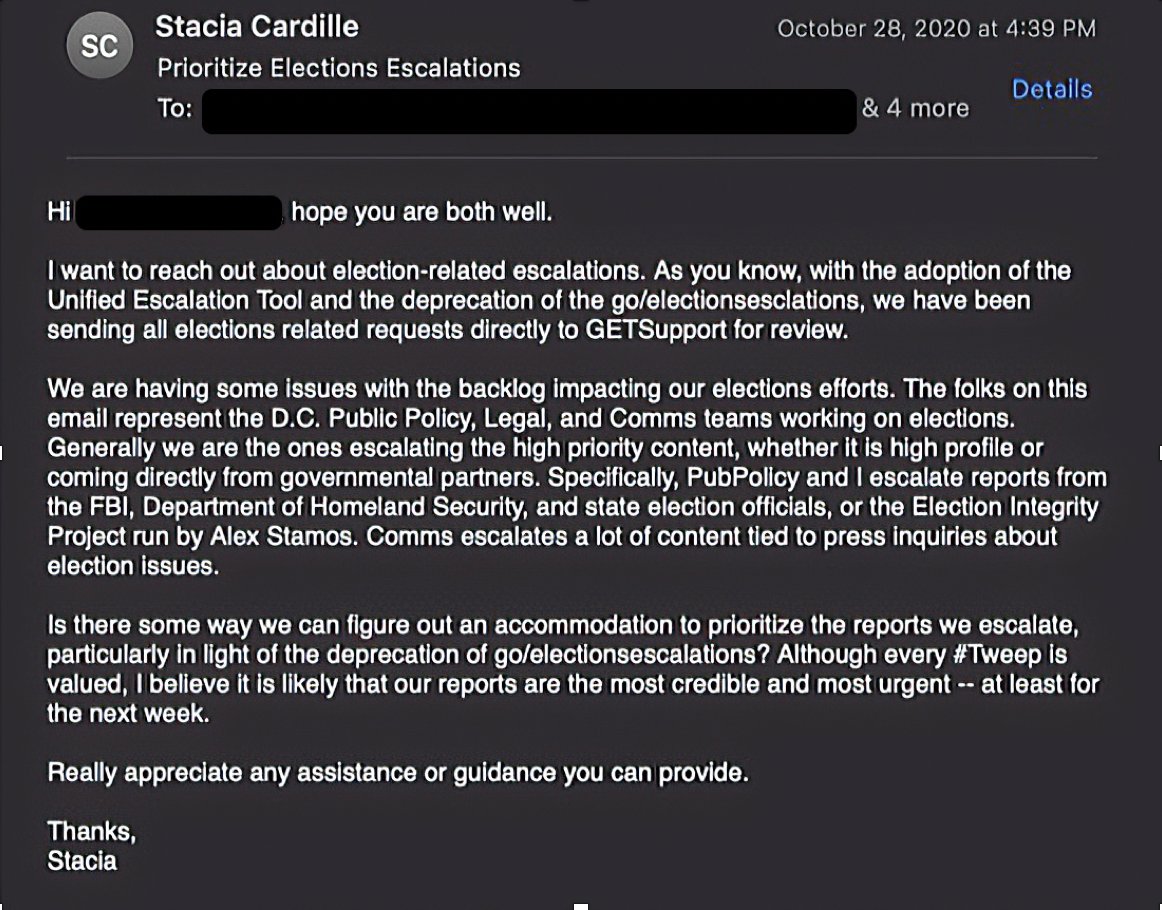 The FBI almost always framed its censorship requests as pointing out a “possible terms of service violation,” even in the subject line.

Former FBI-lawyer Jim Baker even seemed confused at all the requests, writing: “Odd that they are searching for violations of our policies.”

The New York FBI office sent requests for the “user IDs and handles” of a list of accounts named in a Daily Beast article. Twitter executives replied they were “supportive” and “completely comfortable” in complying.

“It seemed to strike no one as strange that a ‘Foreign Influence’ task force was forwarding thousands of mostly domestic reports, along with the DHS, about the fringiest material,” Taibbi said.

The FBI claimed to have been running a ‘foreign influence’ operation, but what it was clearly doing was running a ‘domestic influence’ operation. The federal law enforcement agency has no business being involved in America’s internal politics debates on social media and it’s now up to Congress to actually do something to put the politicized FBI back in its box.