Former FBI and CIA operatives have been exposed as central figures in the Twitter Files‘ recent revelations that the social media platform engaged in a sweeping censorship and election interference operation.

“Exclusive: Bari doesn’t name too many names but the head of Twitter’s Strategic Response Team when secret actions were taken to stifle conservative accounts happened under Jeff Carlton, who worked for both CIA & FBI,” Ngo wrote. “He just deleted his LinkedIn. But I have an archive. @elonmusk”

A Trust & Safety leader from Twitter named Ella Irwin chimed in to try to correct the record.

This is actually false. I would recommend checking information like this before posting. Jeff stepped into this role as part of Twitter 2.0.

“This is actually false,” she claimed. “I would recommend checking information like this before posting. Jeff stepped into this role as part of Twitter 2.0.”

However, Jeff Carlton’s archived LinkedIn profile shows that he was on the Strategic Response Team, albeit in a different role prior to November 2022. (Carlton appears to have been promoted.)

He was a Senior Program Manager rom May 2021 to November 2022. The profile says he, “Built and led a programs team that optimizes intake, new workflow integration, training and quality, systems and tooling, and knowledge management for Twitter’s Strategic Response Team.”

In November 2022, he switched to a Senior Manager, where he now “leads Twitter’s Strategic Response Team of 50+ employees / agents in resolving the highest-profile Trust & Safety escalations. Manage crises and non-standard incidents in content moderation and customer support to promote ‘healthy public conversations’.”

In the archived LinkedIn page, it details Jeff Carlton’s experience in the intelligence community, including his assignments working with the FBI and CIA.

“U.S. Naval Academy graduate with 14 years in the Marine Corps leading XFN intelligence teams in data analysis, strategy development, and operational planning,” the profile continues. “Team-builder and problem-solver in dynamic, high pressure, resource scarce environments from the Southern Philippines, to Iraq, to the Korean Peninsula. Proven manager of managers. Expert communicator whose briefings and writings drove Cabinet and White House-level decision-making during special assignments to the CIA and FBI. Innovative and technically savvy in integrating dozens of complex hardware and software solutions into operations.”

Ngo and Irwin continued to debate Carlton’s role with Twitter, but she did not directly dispute the central point about his intelligence background.

“Do you have a connection to ex-CIA & FBI intelligence operative Jeff Carlton, or Twitter?” Ngo asked. “The LinkedIn profile he has tried to scrub says he’s been doing work for Twitter’s Strategic Response Team since May 2021.”

“Oh. Yes, you do,” he added, providing a LinkedIn snapshot. 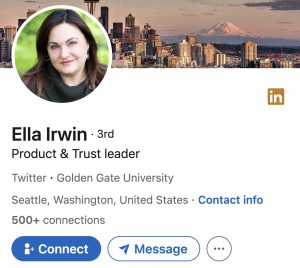 Ngo continued to lay out Carlton’s background and the relevance to the latest Twitter Files developments.

“Head of Twitter’s Strategic Response Team, Jeff Carlton, who worked for CIA & FBI, deleted his LinkedIn quickly in response to #TwitterFiles. Before deleting, he changed his name to an alias to make him harder to find. But I have an archive: https://archive.vn/2CCw9,” he wrote.

“‘[Jeff Carlton] worked for both the CIA & FBI, authored dozens of official reports, some of which were read by President Barack Obama.’ The ex-intelligence operative who was part of Twitter team behind secret efforts to stifle conservatives,” he added.

Ngo then linked to a ZeroHedge article that shows that Twitter went on a hiring spree for spooks and Fed operatives, as of the summer of 2022.

“For example, in 2019, Dawn Burton (the former director of Washington operations for Lockheed Martin) was poached from her job as senior innovation advisor to the director at the FBI to become senior director of strategy and operations for legal, public policy, trust and safety at Twitter,” the article points out. “The following year, Karen Walsh went straight from 21 years at the bureau to become director of corporate resilience at the silicon valley giant. Twitter’s deputy general counsel and vice president of legal, Jim Baker, also spent four years at the FBI between 2014 and 2018, where his resumé notes he rose to the role of senior strategic advisor.”

Jim Baker, recently fired by Elon Musk abruptly after the initial Twitter Files release, which appeared to be scrubbed of references to the FBI’s activities, was also a key figure in the Russiagate scandal.

“Meanwhile, Mark Jaroszewski ended his 21-year posting as a supervisory special agent in the Bay Area to take up a position at Twitter, rising to become director of corporate security and risk,” the post continues. “And Douglas Turner spent 14 years as a senior special agent and SWAT Team leader before being recruited to serve in Twitter’s corporate and executive security services. Previously, Turner had also spent seven years as a secret service special agent with the Department of Homeland Security.”

“When asked to comment by MintPress, former FBI agent and whistleblower Coleen Rowley said that she was ‘not surprised at all’ to see FBI agents now working for the very tech companies the agency polices, stating that there now exists a ‘revolving door’ between the FBI and the areas they are trying to regulate,” the article notes. “This created a serious conflict of interests in her mind, as many agents have one eye on post-retirement jobs. “The truth is that at the FBI 50% of all the normal conversations that people had were about how you were going to make money after retirement.”

“Many former FBI officials hold influential roles within Twitter,” the article adds. “For instance, in 2020, Matthew W. left a 15-year career as an intelligence program manager at the FBI to take up the post of senior director of product trust at Twitter. Patrick G., a 23-year FBI supervisory special agent, is now head of corporate security. And Twitter’s director of insider risk and security investigations, Bruce A., was headhunted from his role as a supervisory special agent at the bureau. His resumé notes that at the FBI he held ‘[v]arious intelligence and law enforcement roles in the US, Africa, Europe, and the Middle East’ and was a ‘human intelligence and counterintelligence regional specialist.'”

“Meanwhile, between 2007 and 2021 Jeff Carlton built up a distinguished career in the United States Marine Corps, rising to become a senior intelligence analyst,” the June 2022 article adds. “Between 2014 and 2017, his LinkedIn profile notes, he worked for both the CIA and FBI, authored dozens of official reports, some of which were read by President Barack Obama. Carlton describes his role as a ‘problem-solver’ and claims to have worked in many ‘dynamic, high-pressure environments’ such as Iraq and Korea. In May 2021, he left official service to become a senior program manager at Twitter, responsible for dealing with the company’s ‘highest-profile trust and safety escalations’.”

Ngo then added a clarification to his original tweet: “Clarification: Jeff Carlton became head of Twitter’s Strategic Response Team in November 2022, a role he inherited after working with the team since May 2021, according to his newly-deleted LinkedIn.”

On Thursday, Elon Musk confirmed that Twitter had engaged in massive election interference, including the politically motivated boosting and suppression of candidates’ accounts, along with a sweeping censorship operation that included the shadowbanning and blacklisting of conservative Americans.