Yet another Hollywood star has joined the mass-exodus out of California and it’s not a massive shocker why. Hollywood actor James Van Der Beek is just another one of the actors to leave Los Angeles, California and head towards more conservative places like Texas.

Of course, actors are not the only folks who have left the state of California, many businesses have also left due to such high taxes and other regulations imposed by the state government which is currently helmed by the infamous Governor Gavin Newsom.

Van Der Beek is known for playing roles in both Dawson’s Creek and Varsity Blues as well as many other hits in the entertainment industry. The actor talked to People magazine about the issue saying:

I know for me, it’s been really centering and I feel like for the kids, it’s been grounding, and a different kind of education that we never could have offered them in a classroom.

Just the things that we’re all aware of, like what phase the moon is in because we come out, we look at it. I feel like we have a relationship with these natural cycles that are happening.

One of the things after moving out to Texas that we lost completely was any kind of food delivery service. So, we started cooking a lot more, and the kids are really getting into it.

When you recognize that ingredients are not just something you dump the whole thing into, you actually have to measure, and there’s a reason for that, it’s great. We have a blast.

Van Der Beek, father of six left the state explicitly stating that the current education system in the state was no longer something he wanted his kids to be a part of.

No matter what is going on in the California school system, the rapid increase of people leaving the state for the sake of their kids is a sign that things are not necessarily going swimmingly.

It’s clear that Van Der Beek is not the only one that is putting his family first and feels that way. He joins a long list of actors and folks exiting Hollywood including movie-business titans Mark Wahlberg and Matthew McConaughey, both who have accredited their reasoning for leaving to family.

Former California resident and Hollywood star Rob Schneider also echoed his distaste for the state’s policies when he made the following statement in a tweet:

Dear Former California Residents, YOU moved out of California for a reason; crime, out of control homelessness, taxes, your children being indoctrinated in schools, individual rights being trampled etc! So please don’t vote the same way to replicate the same sh*t you just left! 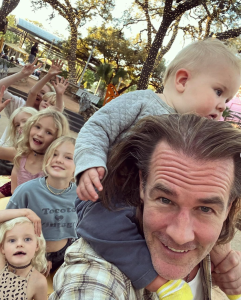 Despite his Van Der Beek’s reasonable way of thinking, some Hollywood elites think the exact opposite and go on tirades on live television about how much they love liberal policies, which you can see by CLICKING HERE.