“Jail Justice”: Gay Couple Who Abused & Pimped Out Their Kids Are Getting What they Deserve in Jail

According to a recent report, a same-sex couple from Georgia is accused of sexually abusing their adopted sons and producing child pornography with them. Additionally, they are alleged to have prostituted the boys to a group of pedophiles in their community.

An investigation conducted over several months by Townhall has uncovered allegations that William Dale Zulock, aged 33, and Zachary Jacoby Zulock, aged 35, used social media platforms to engage in the prostitution of their two young sons, who are of elementary school age.

On Friday, Mia Cathell, the journalist who uncovered the shocking story, finished her story by reporting on how William and Zachary are handling jail.

Check out what she reported:

“Since they’re being prosecuted as co-defendants, the adoptive fathers are housed separately while in pre-trial detainment.

An out-of-county transfer placed Zachary “Zack” Jacoby Zulock in Barrow County Detention Center’s “maximum” security unit “due to the nature of the charges.” Zachary appears to be experiencing what’s colloquially called “jail justice,” part of an honor code amongst inmates and a brand of justice directed at offenders who would harm children in any way: child murderers, rapists, and molesters, a.k.a. “ChoMos.” In terms of the lock-up’s pecking order, they’re the lowest rung on the hierarchical ladder.

Meanwhile, the most William Dale Zulock Jr. is contending with is his dietary restrictions in Walton County Jail.

Zachary isn’t taking jail too well and is suspicious that he is being drugged.

“Umm, I think someone put something in my drink,” Zachary said in a phone call to a family member. “There was a comment made to me last night. Someone tried to give me something, and when I didn’t, the way [the inmate] said it, like, ‘You want another one?’ And I was like, ‘Another one? I never had another one before.'”

“It made my…arm and everything go numb,” Zachary said. “I couldn’t move my hands. My fingers were stuck.” After experiencing “stroke-like symptoms,” he said. “I can’t have something like this happen again.”

“[Haldi] needs to get me out,” Zachary said to the family member while talking about his lawyer.

A month later, Zachary persisted, calling on his lawyer John E. Haldi to “work a deal to get me out on some kind of bond.”

“Tell DA that I want an ankle monitor, and if required, a low bond,” Zachary said to the relative. “[H]aldi needs to try everything possible to get us out. i dont know if he can try to get William out too with this information, or just me.” 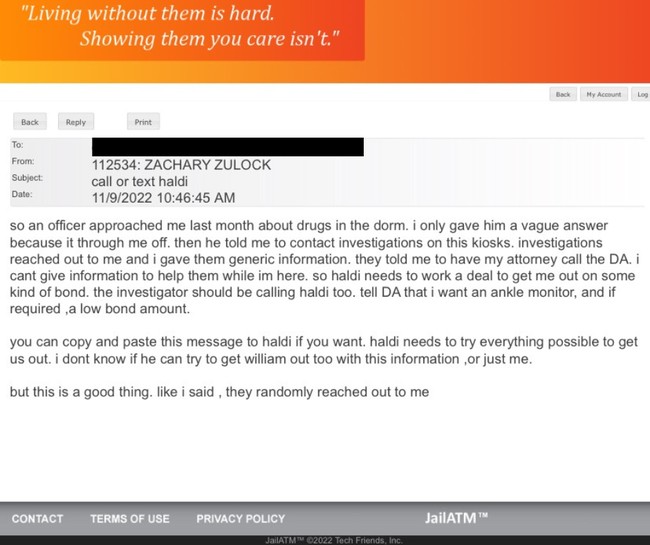 “Its not my fault that i got drugged,” Zachary said to his family member. “i still need to go to a hospital for stroke evaluation.”

Zachary visited a nurse in the jail’s medical wing where they performed bloodwork, administered a dose of Benadryl, and prescribed him anti-inflammatory medication for several days. Zachary suspects that he was given his cellmate’s prescription medication “for nightmares.”

“i was just threatened again,” Zachary said, “to physically beat me or have someone do it for him.” 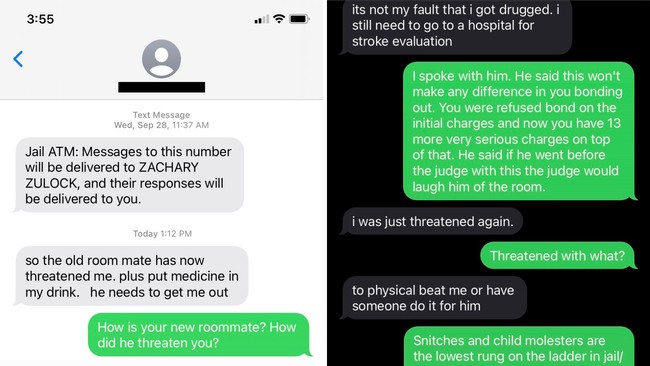 “I mean, I guess the only thing I can ask for is if you can just pray at least, regardless,” Zachary said.

In the meantime, William—like other jailbirds—has a tablet to text on with a digital library of books to choose from. One time the relative checked in with William, he was looking forward to an origami do-it-yourself book “to keep my mind off of things.”

But it’s not always a state of zen for William, who’s also in maximum security and temporarily let out of the cell block for a four-hour recreation period in the “offenders rec,” as it’s dubbed. Gang members, drug dealers, and murderers bunk together in William’s dormitory, “but they’re not allowed in our rec because if they touch us, they get assault charges,” he explained. (It just so happens that William is related to one of his cellmates by marriage.) “I’m one of the least troubled ones in here,” William claimed. “They don’t know how to talk normal. They like to yell,” William said, when detainees were shouting in the background of the call.

William, who’s lactose intolerant and cannot drink the milk at breakfast-time or any dairy products offered in the slammer, complained about the soy patties and bologna-and-cheese sandwiches for lunch, which he doesn’t eat. “I don’t even know a dog would eat these bologna sandwiches. That’s how low-grade the meat is,” fussed William, whose weight is down to 120 pounds.

“This place is a joke,” William snickered, grumbling about the jailhouse’s “decrepit” housing conditions.

“Pfft, yesterday was miserable,” William said after seeing the indictment documents. “They called me up front again for fingerprints, and I saw the new charges that they’re putting against—I’m assuming—both of us […] There’s 17 charges.”

William said he’s “really worried” about his spouse’s mental well-being. “I know Zack’s a very emotional person, so I know he’s probably locking up and shutting down and not talking.” William requested from the relative: “Well, tell him I love him when you talk to him. I tell him goodnight and good morning, everytime, everyday. I haven’t missed a single day that I tell him goodnight.”

“All I can say is, umm, I don’t want to say it, but brace yourself for the truth,” a choked-up William weeped. “Okay? Just don’t give up on us,” he exhorted, breaking down in tears. Later on, signing off, William insisted: “If you talk to Zack, tell him I still love him.”

The relative relayed William’s message to Zachary. “Oh yeah,” Zachary dismissed William’s love note. “Did you figure out the Instagram thing?” asked Zachary, who wants his Instagram page taken down as rage-filled comments continue to flood his feed.

A week later, William still doted on Zachary. “Please tell him I love him and that he is my husband and I’ll always worry about him,” William texted the family member from the jail’s tablet on inteleMESSAGE, an inmate-messaging application. “Have you talked to him recently? Try and ask him how his day is [and] what did he eat,” William fretted. “Just try to keep him sane.”

“Doing my best to keep my hope[s] up,” William messaged.

William also divulged he voted in the 2022 midterm elections by mailing in an absentee ballot. “Oh, let [Zachary] know I got a letter in the mail for an absuntee baliot [sic]. I mailed it in so I can vote since I’m not convicted yet. See if he got one,” he texted.