President Joe Biden continues to make bad choices for his administration and White House press secretary Karine Jean-Pierre is one of them. She proves why, once again, by referring to Justice Clarence Thomas by the wrong name, calling him ‘Judge Thompson.’ The White House corrected her wrong-name mishap on their website by crossing out the incorrect name and adding the correct name. If there was ever a clown show at the White House, then it’s quite clear that Biden and his administration are the clowns running the show and it’s not a good thing for America.

It’s no surprise that the White House turned off comments and made the video UNLISTED. 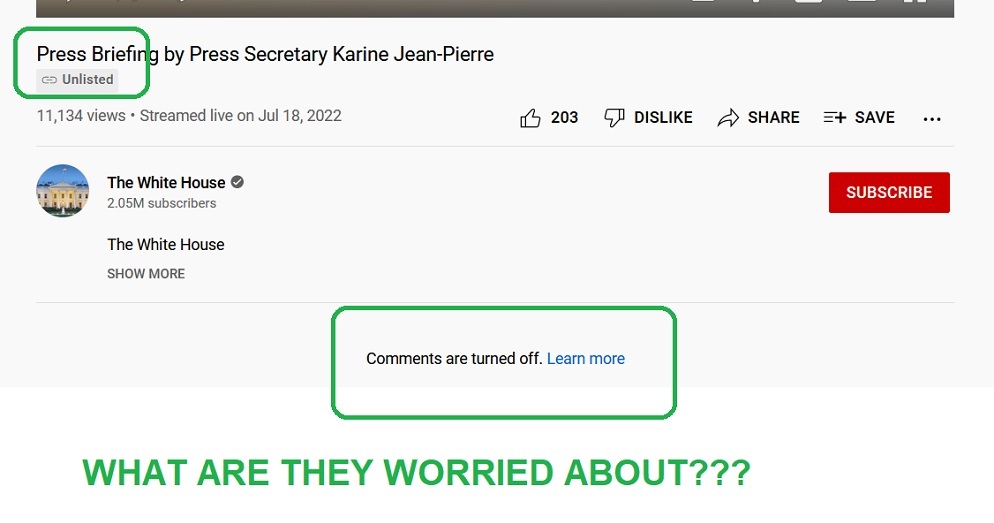 The White House corrected Jean-Pierre on the White House transcript page for their website. It said the following and you can see where they crossed out her mistake and fixed it.

Q Yeah. Karine, on Ukraine, President Zelenskyy replaced his head of domestic intelligence and the prosecutor general. He said during the weekend that hundreds of treason investigations have been opened on new employees of law enforcement agencies. Is there any concern that Russia may be infiltrating Ukraine security networks and undermining the war effort?

MS. JEAN-PIERRE: So, I mean, I’ll say this: You know, we, per usual, don’t speak to any personnel arrangements or domestic politics. That is not something that I will do from him here. But I’ll say this: For our part, we will continue to work with our partners in Ukraine to help them defend against Russian aggression and with the Ukrainian Prosecutor General’s office as they document the war crimes and atrocities that Russian forces in Ukraine are committing. We also continue to support Ukraine’s ongoing anti-corruption reforms as well.

Q And Senator Cruz, over the weekend, said on his podcast that the Supreme Court was clearly wrong in overreaching when it legalized same-sex marriage in 2015. What is the White House view on that? Is — does that raise a lot of concerns?

MS. JEAN-PIERRE: So, I’ll — it should — it should raise concerns. As we know from the Dobbs decision, one of the things that we saw from — from [Justice Thomas] is that they’re looking to go further, whether it’s privacy, contraception, or marriage equality.

BREAKING: DeSantis Torches Apple Over Twitter Debacle, Accuses Them of Being a “Vassal of the Chinese Communist Party”

On Monday, Twitter owner Elon Musk dropped a bomb on his social media app when he announced that he will be releasing all of Twitter’s files relating to how the… Read More »BREAKING: Elon Musk Vows To Release Bombshell Documents Exposing Twitter’s Liberal Management

WATCH: The View Squabbles Over Trump’s Announcement to Run in 2024

The women on “The View,” an ABC daytime talk show, did not like the fact that former President Donald Trump has said he will run for president again. The fact… Read More »WATCH: The View Squabbles Over Trump’s Announcement to Run in 2024