Republican Kari Lake’s legal challenge against former Secretary of State and now Governor-Elect Katie Hobbs was thrown out on Saturday.

The court rejected Lake’s claim that ballot printer and tabulation issues at a significant number of polling places on Election Day were the result of official misconduct that changed the results of the election.

In a decision Saturday, Maricopa County Superior Court Judge Peter Thompson found that the court did not find ‘clear and convincing evidence’ of the official misconduct that impacted the election. Lake will appeal the ruling, she said in a statement.

Former Secretary of State and Governor-Elect Katie Hobbs did not testify about certifying her own election. Kari Lake’s team withdrew their subpoena of Hobbs earlier in the week.

Kari Lake exuded confidence following the last day of the Arizona election trial on Friday that she had made her case: Maricopa County election officials and her rival gubernatorial candidate Katie Hobbs had acted with “malicious intent” to deprive her campaign and Arizona voters of a free, fair, and cleanly run election.

Here is my statement following the conclusion of our Election Trial: pic.twitter.com/Jq9THJJ5oO

“I’m just going to make a quick statement,” Lake said following the trial. “I am so incredibly proud of our amazing attorneys and staff that put this amazing case together, historic case.”

“We proved without a shadow of a doubt that there was malicious intent that caused disruption so great it changed the results of the election,” she added.

“We provided expert testimony,” she added. “We provided experts. The other side, brought in activists to try to save face. They admitted that they’ve known about these ballot problems. That they’re ballot problems. Now they’re trying to say that it’s been going on for three elections. Our elections are a mess in this country, and I am so happy to stand up and say, no longer will we, as Americans put up with this. We demand fair, honest, transparent elections and we will get them.”

Kari Lake also had some kind words for Judge Peter Thompson, who presided over the case.

“And the defendants, their attorney said it in his closing statement. He said, we choose our rulers. Isn’t that telling?” she added. “This was a selection, not an election. And we in America choose who represents us, and we will restore honest elections.”

Lake was referring to the remarks of Katie Hobbs’ lawyer, who argued that we Americans ‘choose our rulers.’

Says Americans choose their own “rulers”

Says you can’t go contest an election in court after results pic.twitter.com/1WNWWmr4ha

However, there was compelling expert testimony that highly suggested that the ballot printer issues referenced above could not have been unintentional.

Maricopa County Elections Director Scott Jarrett confirmed in court that the ballot printer and tabulation errors that sowed widespread chaos in the Arizona election was caused on Election Day.

“Is it your testimony that the printer set changes that led to the so-called ‘shrink to fit’ issue was that done on Election Day?” Kari Lake’s attorney Kurt Olson asked.

“Elections director Scott Jarrett confirms that the printer setting change that led to the mass disenfranchisement of Arizona voters DID occur the morning of election day,” the Kari Lake War Room reported.

Also in Thursday testimony, election modeling expert Richard Baris said that his projections showed as many as 40,000 voters were disenfranchised over Election Day chaos in Arizona’s Maricopa County. Baris said he would “have no doubt” that she would’ve won the election had there been no issues at polling centers.

Baris testified that 25,000 to 40,000 voters were disenfranchised in the county due to his estimation that roughly one in five vote centers had problems ballot tabulator machines in the first hours of Election Day.

“We’ve got about 20% of the locations out there where there’s an issue with the tabulator,” Maricopa Board of Supervisors Chairman Bill Gates said on election night. Election officials, however, told voters their ballots would still be counted as a result of redundancy protocols.

The vote margin between Lake and Hobbs is 17,117 votes. Baris is the last witness that Lake is calling in the scheduled two-day trial for her election lawsuit.

Under cross examination, Kenneth Mayer, a political science professor at the University of Wisconsin-Madison, admitted that he didn’t verify the accuracy of the wait times provided by Maricopa County.

Much of the chaos on Election Day in Maricopa County was the appearance of the “shrink to fit” ballots, which had been used in three prior elections.

Kari Lake’s legal team attained a legal victory by given authority to randomly inspect ballots from Maricopa County’s election as part of her 70-page lawsuit that Lake filed against top state election officials.

During ballot inspection, it was revealed that 48 of 113 ballots reviewed were 19-inch ballots produced on 20-inch paper. 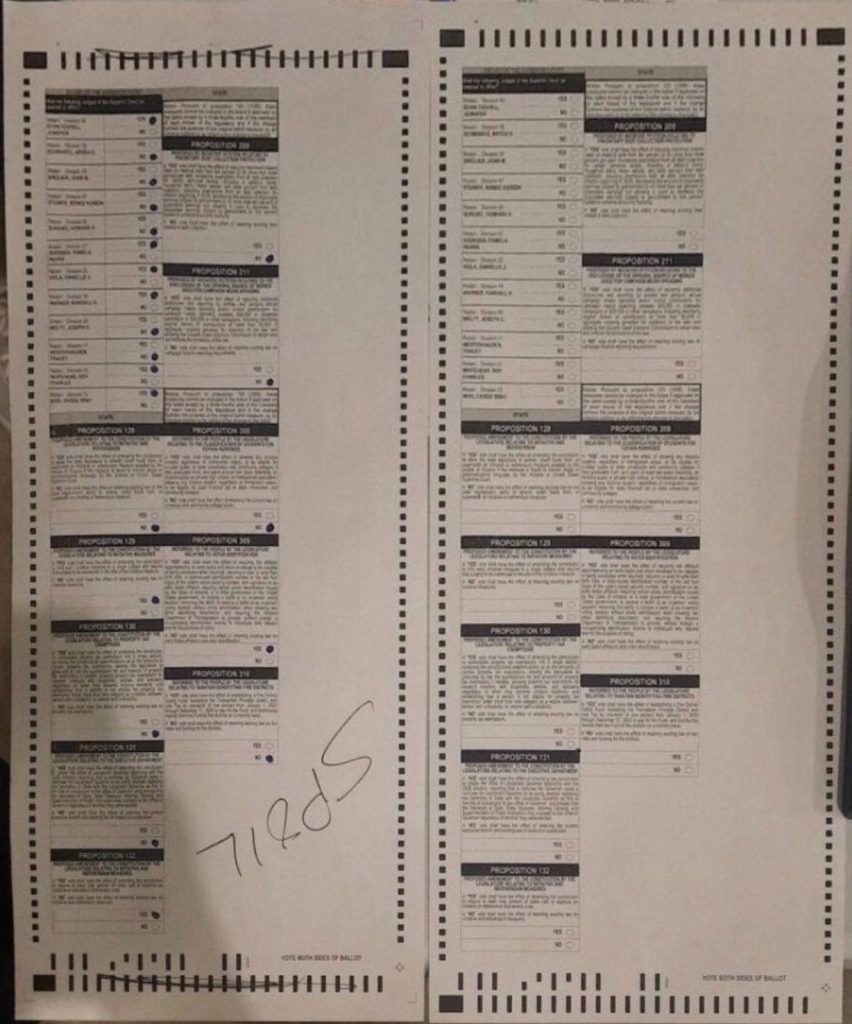 This one-inch discrepancy caused ballot tabulators to reject thousands of votes and sowed chaos on Election Day in Maricopa County.

An expert witness testified there are only two ways for the 19-inch image to have been projected onto the 20 in ballot, which would cause tabulator errors. The witness verified that both methods required an administrator to change and it could not have happened by chance or error. Thus, it is a form of fraud.

It wasn’t just the absence of sensible and trustworthy procedures that has led to a crisis of confidence in Arizona’s election results. It was the complete lack of election security that further undermined the results’ credibility.

“Runbeck employees describe trucks coming in with no corresponding documentation,” KLWR reported. “No chain of custody was kept during this transport. When Runbeck reached out to Maricopa County they said it wasn’t ‘necessary.’ This is the complete breakdown of election law.”

“Remember the participation of Runbeck in this process AT ALL is already in violation of Arizona State statute,” the account added. “Couple that with the fact that ballots were dropped off, counted(?), and taken out with NO documentation.”

During the court hearing, the Maricopa County Recorder Steven Richer admitted that the county doesn’t even adhere to state law requiring a chain of custody for ballots. The county ‘deems’ the right amount at the central tabulation facility.

“Does anybody know when those ballots leaving the voting centers, how many are in the bins?”

This is a MAJOR problem!

Maricopa County Recorder admits chain of custody is totally meaningless, they can magically say how many ballots appear at central tabulation facility pic.twitter.com/WIJr7tS7Zx

Internal communications between top election officials in Maricopa County in the aftermath of Election Day reveal that they struggled to reconcile a discrepancy of almost 16,000 in outstanding ballot totals, as was reported by Just the News.

“Unable to currently reconcile SOS listing with our estimates from yesterday,” Richer wrote. Maricopa County estimated having 392,000 ballots left to be counted, while the secretary of state’s website said there were 407,664 ballots left.

Thus concludes one of the most bizarre episodes in American political history, which comes from a county that has become known for dysfunctional elections that just-so-happen to produce the results that Democrats and anti-Trump Republicans want.