A school district in the state of Wisconsin is now being sued due to its gender identity training materials which grant permission to teachers and other school staff members to keep the gender transition of students hidden from their parents. This is a prime example of schools overstepping their boundaries and undermining the authority of parents over their children. It’s this very scenario that inspired Gov. Ron DeSantis, a Florida Republican, to put together the “Parental Rights in Education” bill in his state.

According to the Daily Wire, “America First Legal (AFL) and the Wisconsin Institute for Law and Liberty (WILL) filed the lawsuit on behalf of a group of parents against the Eau Claire Area School District (ECASD), along with its board members and superintendent, claiming the current policies violate their freedom of religion and parental rights.”

“Policies like Eau Claire’s blatantly violate parents’ constitutional rights to raise their children. School staff do not replace parents while their children are at school. A gender identity transition is a major event in a child’s life; schools must defer to parents about this,” WILL Deputy Counsel Luke Berg went on to say in a statement concerning the lawsuit and the situation with the schools.

The group of parents, who go by the name Parents Protecting Our Children, shared their concern over the training, which could allow teachers and other staff members to hide the transition from students’ parents.

There was a questionnaire that was used during the training, which was provided by the AFL, that reveals the kind of content that was part of the training staff received. 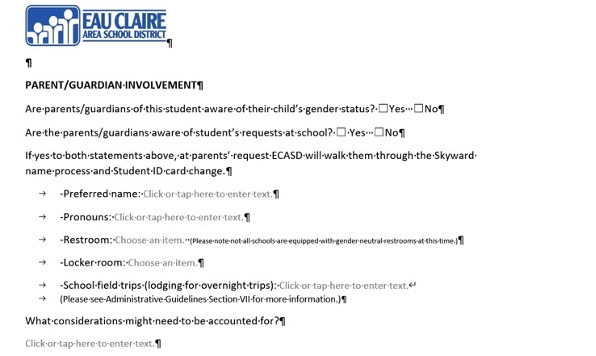 Another of the slides in the program claims that “parents are not entitled to know their kids’ identities. That knowledge must be earned.” The training then encourages teachers to prioritize the student over the rights of the parent.

“During a “‘Safe Spaces Part Two’ training for the district’s teachers, the facilitator, Christopher Jorgenson, stated: ‘We understand and acknowledge that teachers are often put in terrible positions caught between parents and their students. But much like we wouldn’t act as stand-ins for abuse in other circumstances, we cannot let parents’ rejection of their children guide teachers’ reactions and actions and advocacy for our students,’” the Daily Wire reported.

Stephen Miller, the president of the AFL, called the approach the sexual exploitation of children.

“Wisconsin public schools are engaged in the malicious sexual exploitation of minor children and America First Legal is proud to be coming to their defense and the defense of their families,” Miller went on to say in a statement.

“Eau Claire schools have adopted a monstrous plan to secretly ‘change’ the genders of children as young as 5 — without parental consent — effectively subjecting them to unnatural ideological experiments contrary to their health and biology,” he added. “This includes forcing boys and girls to share bathrooms and other private spaces without their consent, a further invasion and desecration of childhood innocence and fundamental childhood wellbeing.”

A school does not have the right to hide anything concerning a parent, let alone something that is related to their mental health and physical well-being. It’s insane that so many liberals think something like that is okay. However, it’s not surprising they adopt this point of view.

Progressive ideology doesn’t see the parents as the ultimate party responsible for raising a child. They believe that responsibility belongs to an entire community, the whole “it takes a village” way of thinking. When a child is born, in their eyes, that life belongs to the community, to the state. Since the state is made up of elites and experts in every area, they are more qualified to raise a child then you are.

That’s what they think anyway, though that is most definitely not the case. You are the parent. You are the one that is responsible for raising him or her. Not the state. Not the community. And that’s why it’s so critical for parents to stand boldly against this sort of intrusion into the family sphere and put the state back in its place.